The question applies to us all the more when we reflect on our share in the structural sins of our time. There are racial inequalities through which minority groups do not receive the support, the education, the opportunities for work and the respect they are entitled to. I am not personally responsible for all this injustice, but as a member of a society that perpetuates the injustice, I too share the guilt.

As a citizen of a world where children starve in one part while harvests are destroyed in another, where violent crimes, wars and massacres are commonplace, and where the rich become richer and the poor poorer, I cannot disown complicity. We Christians believe that such forgiveness is offered by God as the first step in a process of transformation. 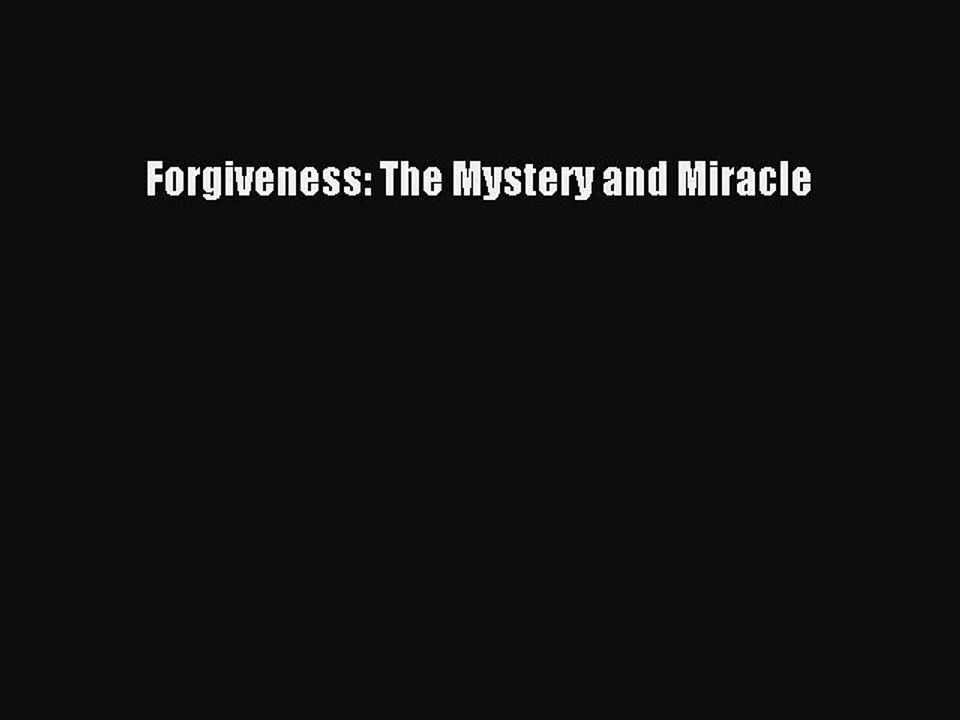 The word we use is salvation. Salvation does not take away our responsibility to mend our ways and continue to improve our world. It makes this responsibility easier by giving us a fresh start, by healing the wounds of the past and giving us a new vision to work from. In Jesus Christ God manifested himself as Love. I understand you. I accept that you are sorry for all the things that you have done wrong. As the first gift of my love, I offer you forgiveness.

Since I am the creative power that allowed you to become what you are, I can heal your past, wiping away your sins as if they never existed. I can make you new by the touch of my Love. If I may use traditional language, in baptism God both forgives original sin the communal sin we share with the whole human family and personal sin , and God establishes a new relationship by making us his adopted children.

If, later in life, I need forgiveness again, this is available to me in the sacrament of reconciliation. Provided I am truly sorry for my sins, I may confess my sins to a priest who will then forgive me in the name of God. If we have been healed by Christ, we ourselves can become instruments of reconciliation.

For there are many deep divisions between people that can only be healed by a miracle of love. An act of injustice will provoke the victim to vengeance and retaliation. Murder leads to counter-murder. Contempt leads to hatred, and hatred in turn to deeply ingrained hostility. Human history is full of escalations of violence and counter-violence, of the never ending spiral of hurt and revenge. Think of the conflicts between Arabs and Jews, between Protestants and Catholics in Northern Ireland, between neighbouring tribes in Africa.

Les Hewitt, Top Performance Business Coach and International best selling author of The Power of Focus states, In this masterpiece of personal growth and triumph, Annette Stanwick turns the aftermath of a tragic murder into a model for healing. Lucille Mandin, Ph. D, University of Alberta says, This book is a gift to humanity. Unexpected stories are immerging from individuals in various walks of life who are healing from all types of wounds.

This book brought miraculous healing to our family at the time we needed it most. Says L. Christian psychiatrists and counselors are extolling the benefits of the book for readers and for use in their professional practice settings. The power of this book is in the author s ability to spotlight the difficult and perplexing real life situations we all face, yet often feel so alone as we navigate the maize of corridors we travel in trying to cope with the relationship challenges that continually arise.

Stanwick invites the reader to take an intimate look at those real life situations, but then takes the reader by the hand; friend to friend, giving them the opportunity and encouragement to reflect on their own particular set of circumstances, gently guiding them through a meaningful process that leads to releasing and letting go of their painful past experience. The power of story telling role modeled by the author and a method for the reader to tell their own story creates a healing atmosphere of trust, that has the potential to bring much needed relief to those in need of help in their life situations.

There are many surprises in this book that keep the reader enthralled with wanting to know more. As I considered the question during the week I came to the realization that all through the years I was seeking forgiveness I had never really stopped to consider what exactly forgiveness is; that is, what changes when a person is forgiven.

I had always been more focused on what I had to do to work the process of repentance in order to be forgiven. What would take away your guilt and pain? To have my sin erased. I pictured forgiveness as the removal of that stain. I found myself looking forward to the next Bible study and the insights I would obtain. At the Bible study I was surprised by the variety of illustrations Heavenly Father has used to portray forgiveness.

His imagery highlighted the profound way in which forgiveness changes a person. One such image is God separating the person from the sin; casting the sin irretrievably away — forgetting the sin forever. Forgiveness results in the forgiven being just as if they had never sinned! Then was the picture I had offered to Patricia; being pardoned.

The Healing Power of Forgiveness by Sharon Platt-McDonald

As we explored these wonderful illustrations of forgiveness a question arose in me. I was amazed to recognize the question had always been in my periphery; yet I had never been able to put it into words — before now. I offered the question up for discussion. How could the LDS prophets make such a claim if God has forgotten the sin? Connie, the former LDS member, was smiling warmly. She answered my question by saying:. Your question is one I had as well.

The error the LDS prophets make is in selling short the dramatic changes forgiveness produces in a person, changes which only can only occur if all sin is removed! The image of being washed radiantly clean by the blood of the Christ returned to my mind. As a Mormon I had been taught to think of forgiveness as being washed clean. I was also taught we are forgiven sin-by-sin. Now I wondered how I never saw the obvious contradiction between those two concepts. How could we be washed clean when in effect only a little mud is removed by each forgiven sin and the vast majority of the mud remains!

Whenever forgiveness was discussed in LDS surroundings it was focused on individual sins. The Process of Repentance was intended to gain forgiveness one sin at a time.

Forgiveness: The Miracle of Magic (Excerpts)

We had been given the picture of a ladder; forever climbing rung by rung as we gained forgiveness for each of our sins and fulfilled each requirement until the Last Judgment when Heavenly Father would decide if each person had done all that he or she could have done. This was a very new proposition for me so I tested it with the group by sharing the LDS illustration of a ladder of progression. There is nothing partway about forgiveness. There is no ladder. There is no process.

There is no progression. Forgiveness is not given for one sin and at the same time withheld for others. Forgiveness is all or nothing! The import of these words resounded in my heart as well as my mind! I had never been cleansed, I had never been reconciled to Heavenly Father, I had not been guiltless, unblameable! What good was a pardon for a single offence when you remained imprisoned for a myriad of other unpardoned offences? As a Mormon most of my sins were still counted against me and so I was not forgiven!

And there I saw the beautiful symmetry of it all. Forgiveness was all sins forgiven at one time because the payment for sin was made through one act that covered all sins. I was just beginning to grasp that forgiveness was so much more than I had ever imagined; that it transformed a person much more profoundly than I could ever have guessed. I was eager to continue our study but it had gotten quite late. Over the next week I looked up the passages we had studied and read them in context.


I found my prayers had changed from asking Heavenly Father for forgiveness to thanking Him for forgiving me. Consequently my focus in life changed from what I had to do to gain forgiveness to what could I do to show Jesus how grateful I was for being forgiven. The morning before the next Bible Study class I got a phone call from Connie.

“Cross is a big hug”

You know when Patricia learned you were going to be coming to this Forgiveness Bible Study she asked me to come. She said I would likely make you more comfortable having also been LDS. She also said I could serve as a bridge for you.